From local stuntman to a key player in one of the biggest films of the year, Kainai Nation member Eugene Brave Rock is quickly establishing himself as an in-demand performer. From his early television work in mega productions like The Revenant and Wonder Woman, Brave Rock is quickly climbing the entertainment ladder thanks to his combination of intelligence, physical skills, and striking look. 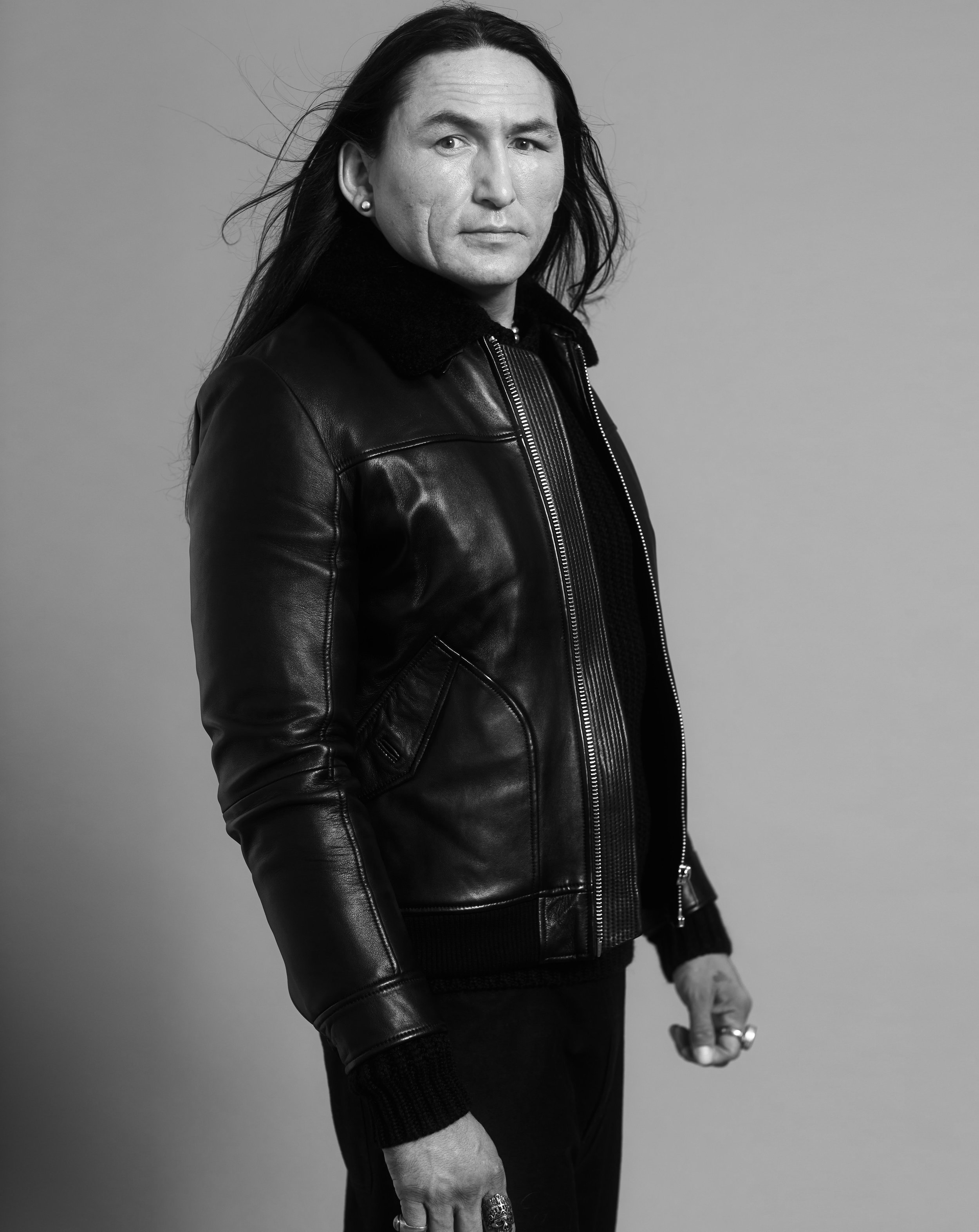 Tell me, what drew you into this industry?Just seeing a Native American on television was like, wow! I remember seeing Chief Dan George, Wes Studi was huge, I mean, even Eddie Spears, he’s younger than me. There were so many, Gordon Tootoosis, Jimmy Herman…

Were these guys who, when you saw them on screen, gave you the confidence and the recognition that that’s something you could do yourself?I saw an Indian on television and said, why can’t that be me? Those are all people that I grew up watching. North of 60 was huge in Canada. Look at how many great actors came out of there – Adam Beach, Tantoo Cardinal, Tom Jackson, Jimmy Herman. It was inspirational. I used to see Jimmy Herman in Calgary every once in a while, and I was star-struck. When Dances with Wolves came out it was a huge thing. It was portrayed in a different light than you’re usually portrayed as and then it showed the family aspect of [Native culture].

You came up both in stunt work but also in Western shows, could you talk about your life doing the more physical actions?Bury My Heart at Wounded Knee was my first feature film. I was hired from a casting call and I came on as an extra, and a couple of days into it, I was approached by the horse wrangler, John Scott, and he asked me if I knew how to ride a horse. I said sure, yeah, of course I know how to ride a horse, so he bumped me up to a special skills extra. Then I was approached by one of the stunt coordinators, Brent Woolsey, he asked if I could fall off a horse, and I said yeah, if you want to know how to ride a horse you have to know how to fall off too! So that was my first step in the door.

After Bury My Heart, a friend of mine introduced me to people at Buffalo Bill’s Wild West show in Paris, France. I spent a year there where it was nothing but riding. It was a dream job, you’re playing cowboys and Indians every day, riding full-tilt on horses. For me it was being able to tell a story to people who would never be able to experience a real live Indian. I met so many people in Europe that were just in awe.

It’s fascinating to be somebody who’s Native, to be part of, as you say, “a Cowboys and Indians thing,” where traditionally the Cowboys were the good guys and the Indians were the bad guys.It depends on which side you’re on! [As a kid] I was always playing Cowboys and Indians, I was always the Indians, and I always won! It depends who you’re playing with, right? I lived on the Blood Indian Reserve, with me and my cousins and my brothers, so I always wanted to be the Indian, of course. I was always proud, you know. I’m still proud.

There you are in Paris in this show, which is obviously having a relatively historically narrow vision of what life was like then. What sort of unique dignity did you bring to a role that normally is just a stereotype?They had French people that played Native Americans, painted faces and that. [With me] the dances are unique, the singing is unique, the riding style, the language… I’m the real deal.

That’s what brought me to where I’m at today; language, all of these traditional values I hold very close. My language, my long hair, singing and dancing traditional, riding horses, those are all values that I think we take for granted as Native American people. Those were our lifelines before, that’s how we survived. That’s what’s taken me around the world, that’s what put me in front of millions of people now.

And then you got selected to do stunt work on The Revenant.I actually got a call before they started production from stunt coordinator Brent Woolsey. He mentioned my name to the production office, as they were looking for a go-to guy for Native American stunt men. Having the skills that I learned in Paris, they ended up calling me. Together with my friend Tim Bruisedhead, we organized a boot camp that we kind of filtered through and helped train some of the guys on set etiquette and different things to come into the movie. Most of them it was their first time, but their riding skills were good, and the look was great.

That was a tough shoot – It was so hard, we were in the elements in the Rocky Mountains of Alberta, and it was harsh. Even when I watch the film now, I feel the cold and think, grab a blanket. One of the guys got hypothermia, it was a long way from anywhere. I’m really thankful to be a part of it, just to see the final product, it’s amazing, right?

How closely would you work with the director Alejandro Inarritu, or were you working primarily with stunt coordinators?I was working with the stunt coordinators. I had an interaction with Alejandro, actually. I was playing my flute in the background, waiting on hold. Chivo, the Director of Photography, got behind me and was recording me. He asked if Alejandro had heard me playing the flute and I said no, I don’t think so. He introduced me to Alejandro, then they recorded me [playing the] flute for The Revenant [soundtrack], which was another big honour.

Which then brings us to, I assume a pretty big shift, where suddenly you’re directly in front of the camera, cast as Chief. How did being part of the DC world come about?I was on hiatus from The Revenant and I was coming to visit my wife and family here in California. On my way down, I got a call [for an] audition at Warner Brothers. I had no idea what it was for, it was a “ghost script,” I guess you would say. So I went to Burbank California, and you know what? I broke down. I lost it, I couldn’t even remember my lines, I was so, how would you say it…

…You were freaking the fuck out.Yeah! I was freaked out and I couldn’t even remember my own name. I was reading in front of Laura Kennedy, she was the casting director, and she offered [that I] read the lines right off the script in my hand. We did a couple of takes with her direction, and at the end of it she said you nailed it, you got it, awesome, great job. I’ve heard that a hundred times before in other auditions and I never heard back from them, so I kind of brushed it off and made it for what it was.

A month later, I ended up getting a call, and they wanted to arrange a meeting between me and Patty Jenkins and to fly me to London for my wardrobe. That’s when I realized that it was for Wonder Woman!

You have a cameo in Batman v Superman – was that shot on Patty’s set for Zach Snyders’s film?That was the first thing that we did for Wonder Woman, yeah.

You’re on this giant set and here you are directly there, working with these other incredibly powerful performers. What was that like?They were all amazing people and I learned so much. Everybody was so down to earth. When you look at big celebrities, you kind of put them on a big pedestal.

Were you a comic book kid?The places where I lived, all we had were Archie magazines, no comic books.

So are you a Betty guy or are you a Veronica guy?I’d have to say Betty.

I assume it was a lot warmer in the U.K. than in the wilds of Alberta?It was amazing to be there in London, it’s a different world. Definitely culture shock, just the magnitude of the production alone was crazy. I lived in central London and I think that was the hardest part for me, with all of those people around. It really made me appreciate my life right now, back here in Canada and America, just having that shoulder room.

You missed the wide open spaces?I missed the sun. It was hard, I took so much vitamin D over there because we didn’t get any sun. With my skin tone, I was pretty pale.

Could you speak about your character Chief Napi’s backstory and how it might fit into other DC projects?The backstory is huge, it’s amazing. You can go back and read the creation stories of Napi and the world and the animals and life. He is a demi-god and he fits right into the comic world. I mean Zeus is in there, why can’t Napi be in there?

If called, is this something that you would do again? Would you want to work on something of this scale, or are you interested in doing something that’s a little bit more intimate?I’d love to show more of Napi’s backstory. For me, I’m sharing my culture and my language with the world and I’m so glad to have that opportunity to represent my people.

Is there a specific story from your culture that is your dream project?You know what, this is it. Napi, in our culture, he’s a storyteller, and he teaches through example. He’ll teach you what not to do by doing it, right? He’s an educator. Every job I do is either as an educator or learning and telling our own stories.

And from here you have more and more auditions coming up.I’m just taking every opportunity I can, and right now, they’re coming at me like crazy. It’s going to be hard to outdo Wonder Woman.

Did you become cooler for your kids when you were in Wonder Woman?All kids across Native America. I have kids telling me they want to be Napi for Halloween! They’re star-struck by me. It was a nice homecoming for me when I went back up to Canada and [saw] some of my people, and the feedback has been amazing.

When Brando had Sacheen Littlefeather go up and accept his Oscar for him, was that a big deal for you?I watched the documentary Listen to Me Marlon in one of the theatres in London, an in-depth look at Brando.

So you watched that documentary and that moment when she goes and gets the Oscar still speaks to you?I put my fist in the air. I was like, yeah, right on! 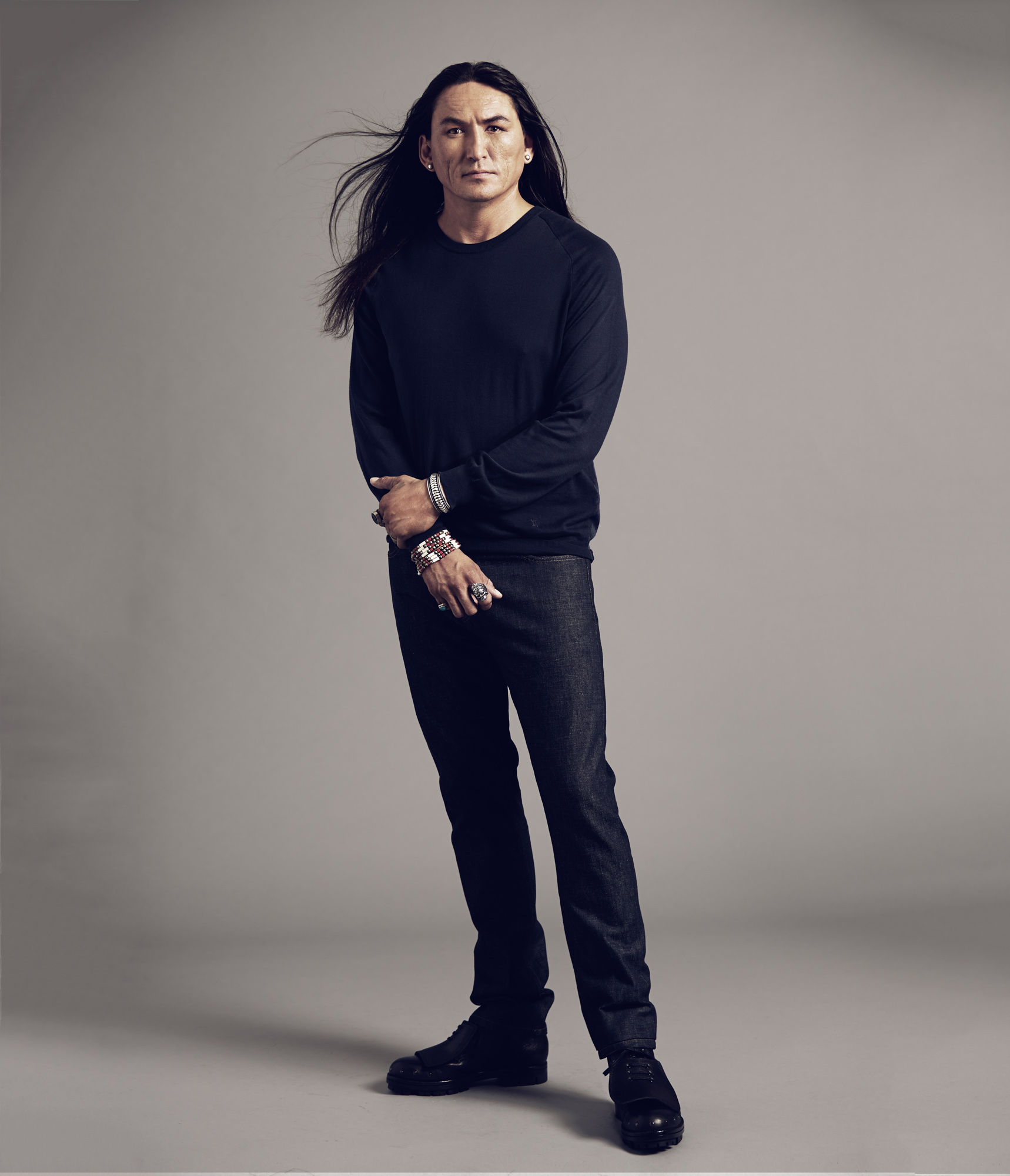