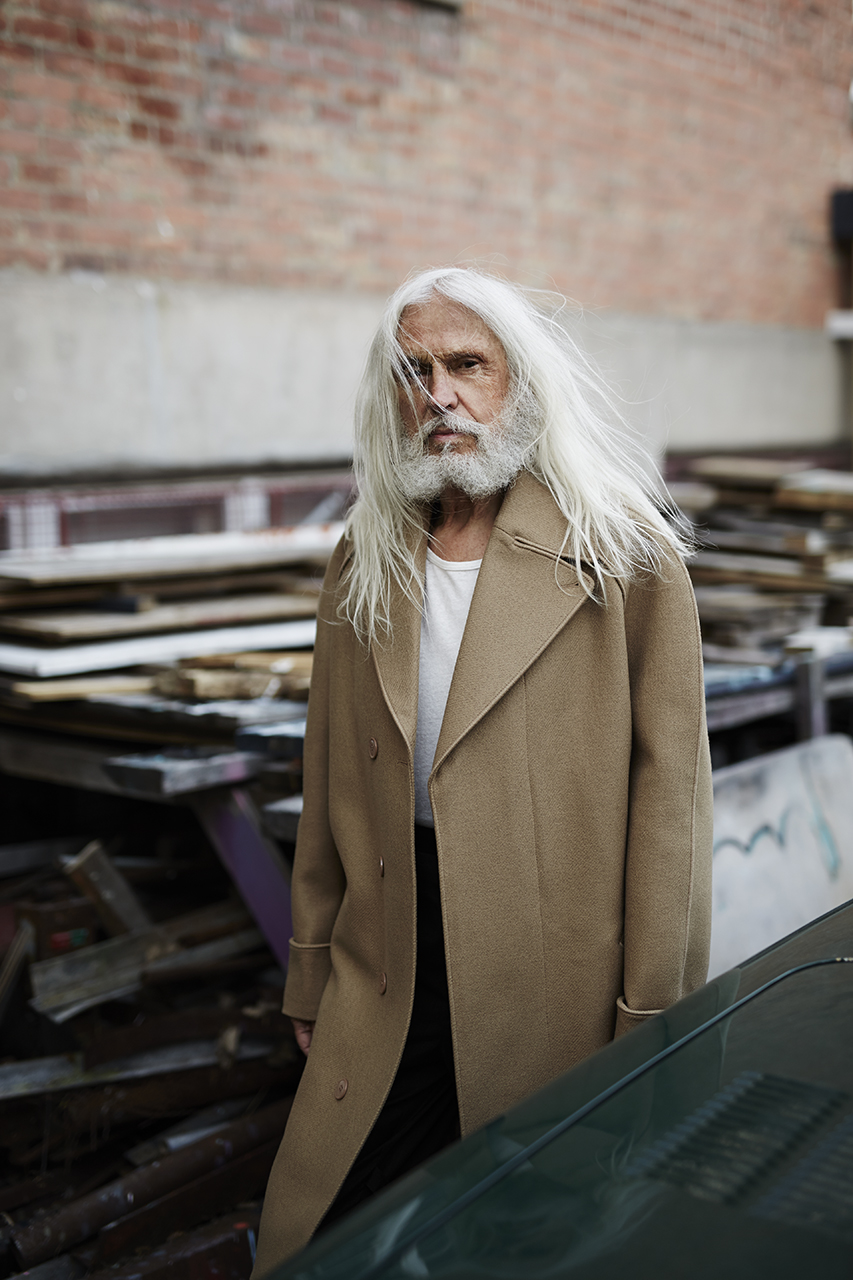 As a photographic subject, his poses are a mix of beauty, elegance, and audacity. His legendary figure, upright body, and long white hair blowing in the wind proudly carry his sculptural signage across North America, while having Quebec as his anchor. Behind the lens, Armand Vaillancourt is invigorated. His independent “cry” for creativity and his commitment to “doing what he wants to do and must do,” as a cultural worker and sculptural artist, make him today’s most famous artist in Quebec.

On the eve of his 86th birthday, Armand Vaillancourt remains wild and free, like automatist poetry, and just as spiritually and physically strong. Life outweighs art. Through his avant-garde vision, this messenger ties artistic creation to the social movements that drive our era. His huge sculptures, made of steel and concrete, his participation in symposiums, his performances, his live murals and paintings as well as his attempts at transmitting an awareness of art to children through the school system, and his political interventions reflect his willingness for social change. He portrays society as a lively, organic material.

His vivid and sensitive memories melt with the collective memory of Quebec. We had an evening that could have lasted all night. The fabulous energy behind the innumerable and relentless stories he tells with ease and precision can be overwhelming. Inspired by his exuberant statements, this article seeks to understand the imaginary world in the mind of the artist. Three recent projects are explored in this interview: the public sculpture La force ouvrière – Hommage à Michel Chartrand, the poetic metamorphosis of his gestural paintings performed at his recent Série noir et blanc, and Sculpture de la honte, which re-cycles ancient achinery into a participatory piece of art, a claim for greater justice for First Nations women. In doing so, Armand Vaillanourt brings us back to his youth. Growing up on a farm and living his young adult years as a bohemian dictated his life as a “sculptor” of urban, industrial, and machinist society, searching for justice in humanity.

Fall has a distinct energy in Quebec; colours make the leaves magnificent. 2015 was the year of the construction and revealing of one of the most impressive monumental sculptures in the country. Among the big trees in this Longueuil park stands La force ouvrière – Hommage à Michel Chartrand, an hommage to a great syndicalist who dedicated his life to workers’ rights and to social justice for the less fortunate. 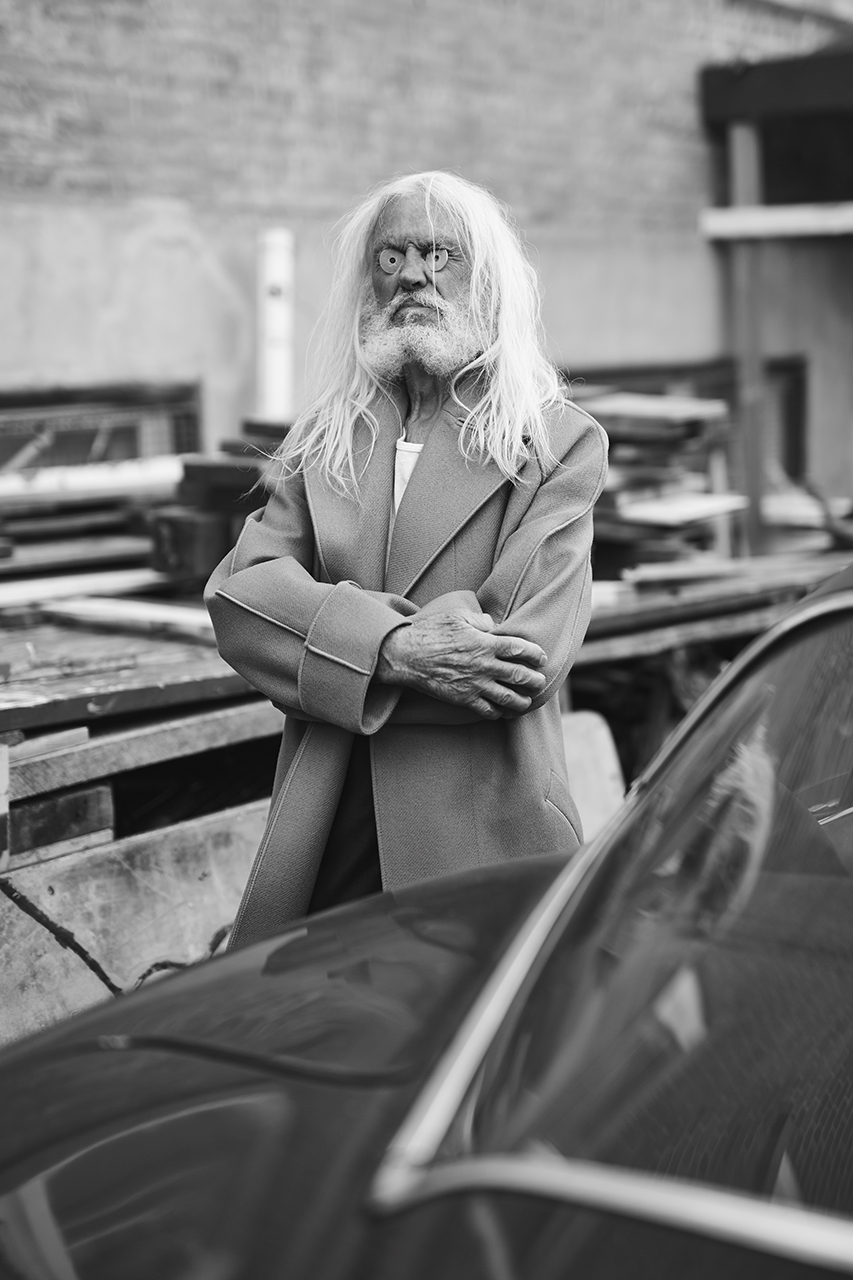 The artist walks through workers carrying tons of metal rods, using machinery to precisely pour concrete, and huge cranes to place twenty enormous steel slabs. He smiles. Who else could have led this project for the past four years?

About their affinity, he says: “Michel Chartrand, the syndicalist, and I, Armand Vaillancourt the sculptor, are contemporary. We have a common stance: solidarity. My sculpture refers to labour. When I design, I work in harmony with the construction workers, planning and service facilities, and the union representatives, who ensure social justice for the working class.”

Vaillancourt describes: “From above, it looks like a flock of large migratory birds. From far, it looks like locked gates that allow the water from the river to pass, controlling the basin level. Erected in a park next to the river, the masterpiece evokes a dock and port equipment. Upon closer look, the space looks surprisingly clear, despite its intense elevation and the strength of its twenty steel slabs. Each slab is 32 feet-long and weighs 24 tons, and is vertically planted into a concrete base, framed by 72,000 kilos of steel metal bars! They look like giant guardians. People will walk through the nooks and crannies of the sculpture, as they did in the ideas advanced by Michel Chartrand. Workers are the strength of it.”

From the collision of these two sources of societal energy, comes this monumental piece of art, a signage of individual trajectories—of “labour force,” the battle of all workers—styled into raw material. We clearly understand why this timeless event attracted media, inflamed social networks with articles and videos, and brought back vibrancy to the career of this great syndicalist, and to the evolution of labour struggles in the political context of Quebec society.

“But, where does the energy of this demiurge sculptor, disciple of steel and forge, machinery, and massive constructions come from?” I asked him. His eyes were alight; so were his words. A succession of inexhaustible stories followed. They invariably bring us back to his family childhood on a farm—the communal incubator of his imagination. 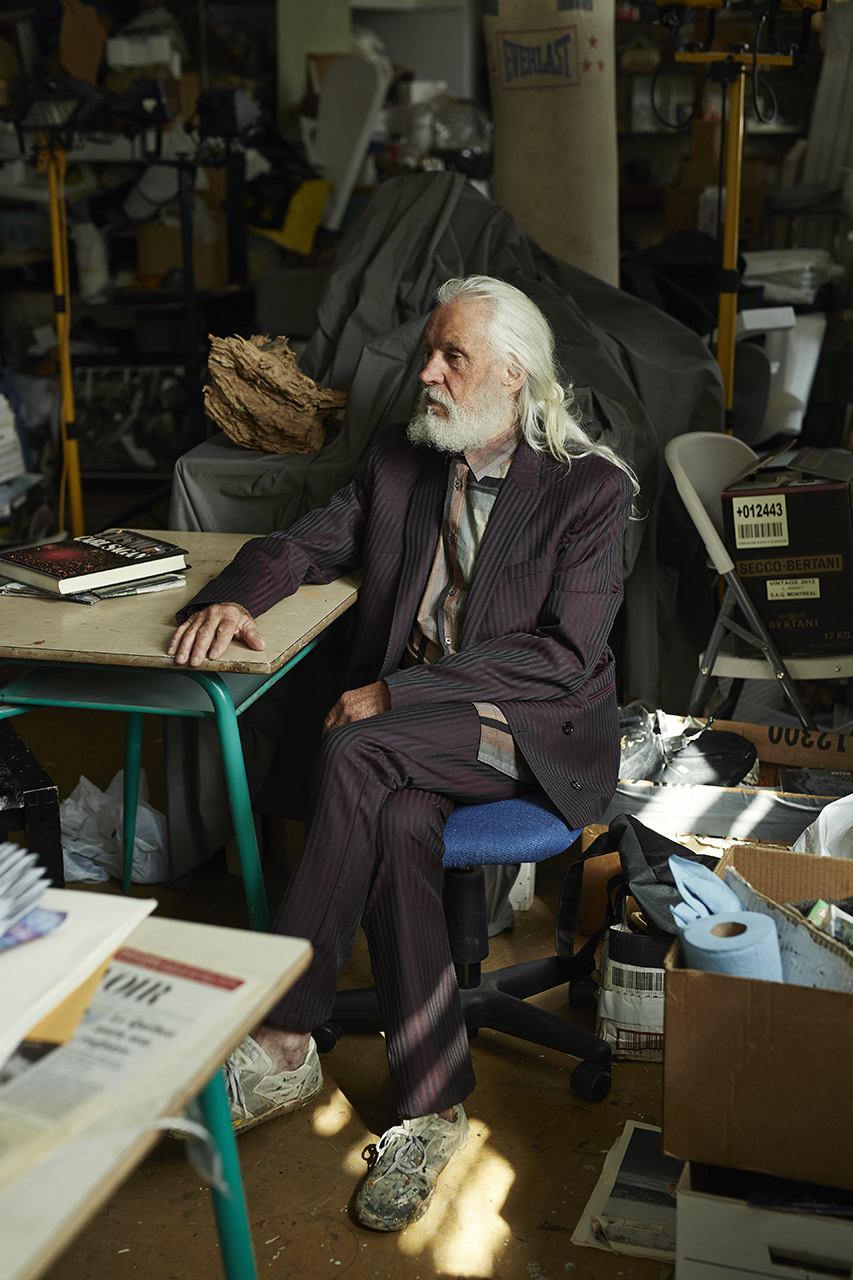 Born in 1929, in Black Lake, a small mining town in the Eastern Townships, Armand Vaillancourt is the 16th child—out of 17!—of a very poor working class family. In the turmoil of economic crisis, while mines were closing, the family moved to a farm in 1932. This communal socialisation in the family clan, almost tribe-like, on a farm was determining. This humble environment forged his sense of community life and his values. His everyday life was made up of warm and loving relations with his brothers and sisters, father and mother. From morning to evening, routine labour was filled with events that happened on the land or in the woods. In his fertile imagination, they became magnificent adventures. The seasonal rhythms of this rural life, surrounded by cattle and horses, rural machinery, farm architecture and dirt roads, shape his childhood knowledge, as well as his agile body and physical fitness, which he maintained all his life. These episodes from his rural childhood feed Vaillancourt’s imagination and never cease to inspire him.

The artist’s wild and free expression is not only sculptural. “For the great master of expressionism of raw construction materials, the act of collective creation is more important than the finished product on the “public-stage.” As the reputed historian and art critic Yves Robillard stated, the spirit of his art originates between Armand the abstract painter and Armand the performer.

Armand Vaillancourt maintained the spirit of live art that he started with other poets and artists inthe sixties with live happenings. This same attitude would then divide itself: on one side, the indomitable creator would contribute to the good reputation of impromptu evenings of painting, performance, and live poetry at bar Les Foufounes Électriques in the eighties and the nineties. He would also host “festive happenings” in his house/workshop organized by the Université de Foulosophie. 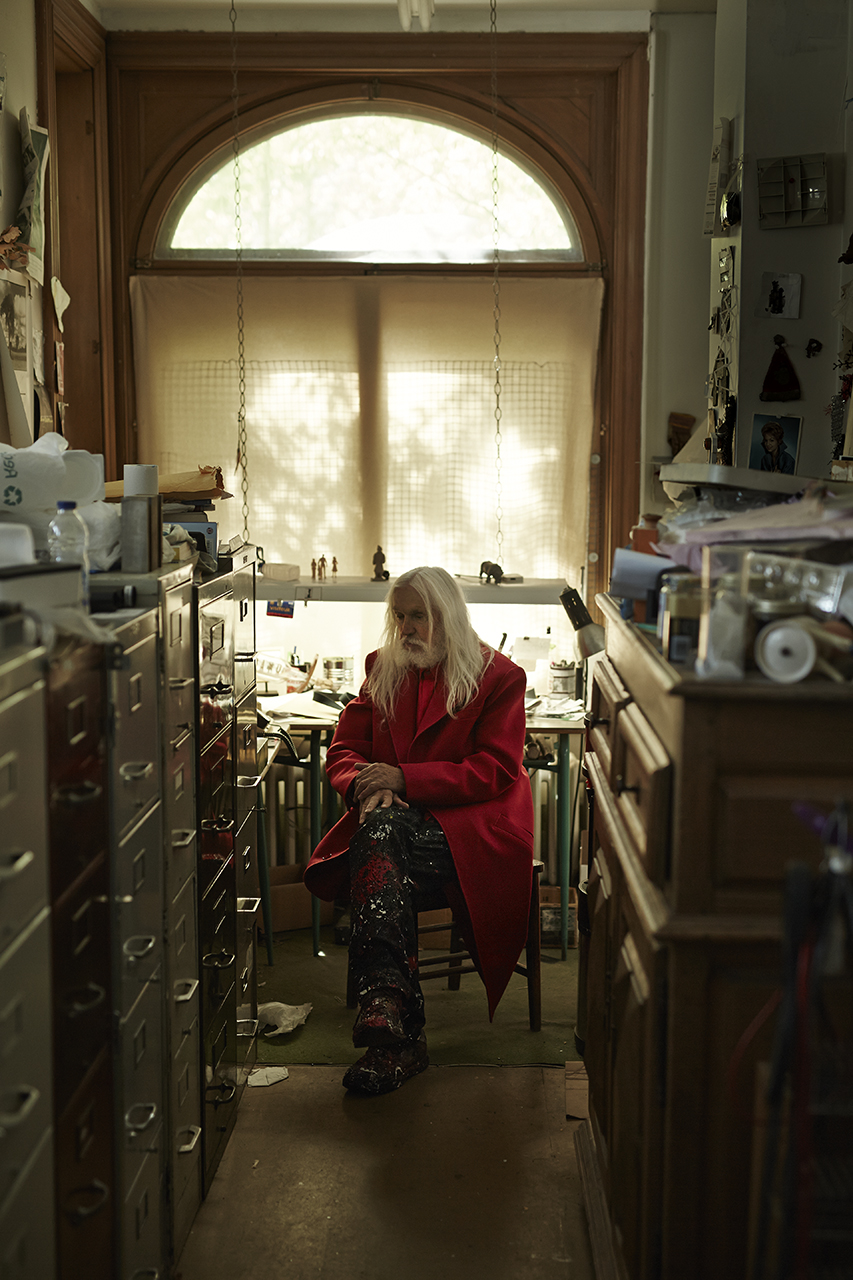 On the other side, with his hundreds of interventions at schools helping kids create illustrations and objects, he maintains the vivacious aspect of automatist and performative pictorial production. In particular, through several exhibitions, like On n’a pas de printemps à perdre, at the Galerie Lounge– TD, on Sainte-Catherine Street in 2011. His series of black and white paintings, including big formats that were created in situ in front of audiences, are his true expressions. How can I communicate the emotion as confessed by the long-haired rebel? “I feel the plastic power of those entire black and white painted canvas every time I bring all the tubes of colour paint. The decision comes as a strong act. A great American who once observed me, once said: ‘Mister Vaillancourt, you have the gift of channelling anger into abstract forms, creating bursts of love!’ I was intrigued.”

“Strong,” we said. To his inspiring childhood on a farm we must add an unwavering generosity! His courageous passion for life is filled with political fights. To his implication in the Quebec Sculptor’s Association (Association des sculpteurs du Québec) and the Common Front of Quebec’s Creators (le Front commun des créateurs du Québec), his language bias, and live poetry, we must add his fight to help political prisoners, his commitment to the sovereignty of the people, and his search for social justice in all of its forms. Armand Vaillancourt has been involved with media, art, and donation since the beginning of his career. Regarding his public positions, participation in events, and passionate harangues against oppressors, he says, laughing: “I should have kept my big mouth shut!”

His consistent ethical position comes from his “American” teenage years, which were full of travel, living to the “beat generation” rhythm à la Jack Kerouac. When he left the farm, as a young adult after the Second World War, Armand Vaillancourt travelled in North America: “By the time I had arrived in Montreal, I had counteracted my ignorance and accumulated knowledge in social and cultural fields. I went through America and visited factories in each city, as well as museums. I was shocked, amongst other things, to see the unfair treatment of Black Americans and Natives by white people.”

From valiant knight who defended the Jordi Bonet’s mural, he became a fierce warrior; think of his famous sculpture made of burnt wood, Justice aux Indiens d’Amérique (1957), which caused an uproar, his series of destroyed sculptures/installations Hommage aux Amérindiens (1991), or his various appearances, wearing a bone mask and painted cloth given to him by American Indians during the Montreal First Peoples’ Festival. Even during his most demanding jobs, which would eventually reach the construction of La force ouvrière, Armand Vaillancourt found time, material, and a nomadic strategy to bring First Nations issues to the foreground.

In parallel to the project in Longueuil, the sculptor was invited to the 2015 summer edition of a unique event in Canada called Recycl’Art in Gatineau/Ottawa. Following his nomadic intuition, Vaillancourt found, at an industrial company, a huge rusted framework from a venerated crane and its separated cabin. Thanks to his formal passion for these heavy industrial machines, he recycled it into a visual and original sculpture. Even if this “thing” weighs hundreds of tons, the large-scale sculptural artist undertakes to have the colossus frame moved from Montreal to Le ruisseau de la Brasserie, Hull District, to become a politically engaged participatory artwork. 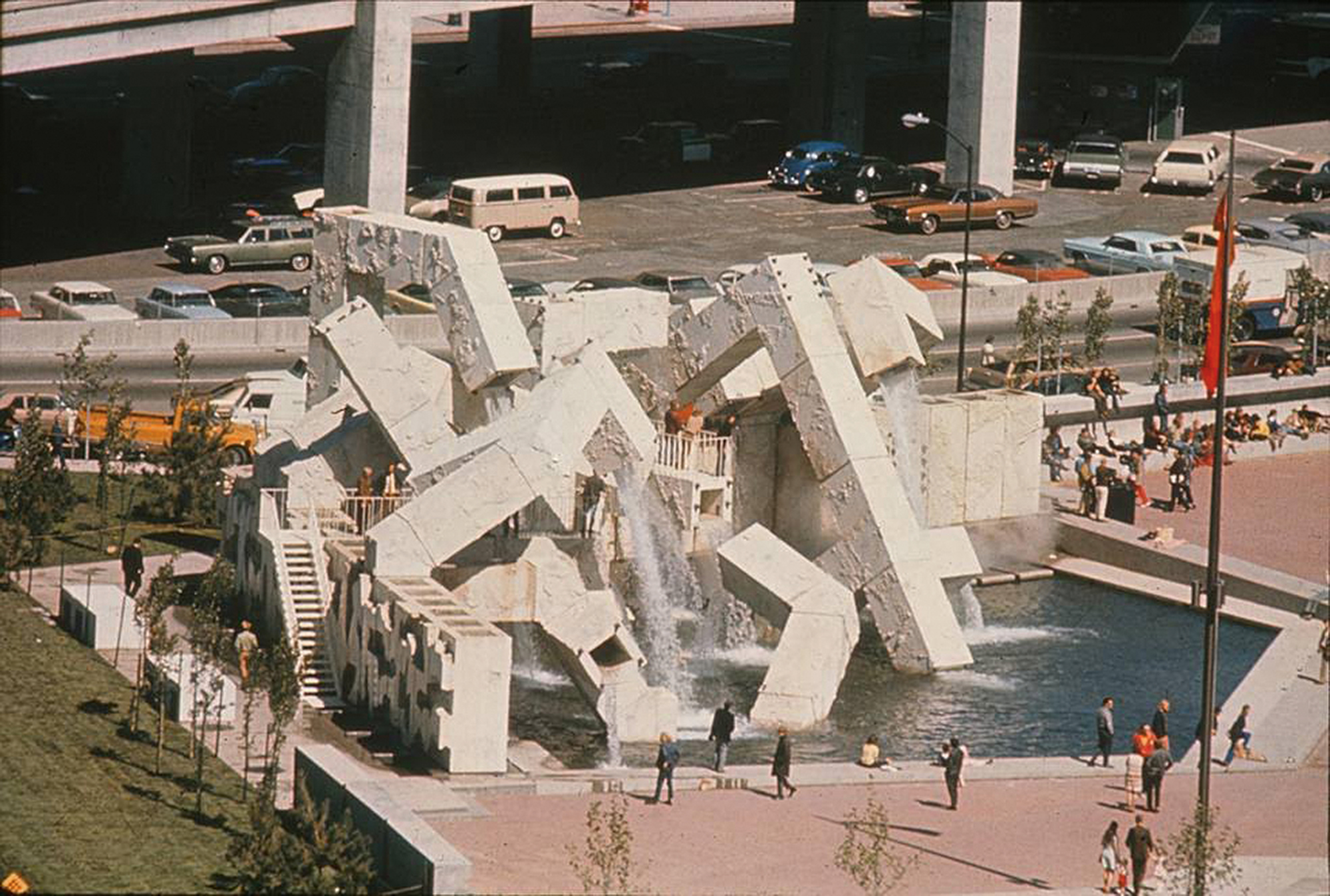 By naming it Sculpture de la honte, the artist politically—and socially—“recycles” his piece of art. He criticizes the Harper Government’s inertia in the cases of thousands of First Nations women missing or violently killed, and supports the recommendations proposed in the recent report from the Truth and Reconciliation Commission of Canada that regards residential schools as measures of “cultural genocide.” At the end of the event, Vaillancourt produced a collective performance named Paroles de femmes. It was an act of resistance and sincere tribute to the First Nations women of Canada.

All of this is Armand Vaillancourt—an unfettered visionary in the landscape of Canadian art.

For more coverage on the best in art, click here.