The man behind the alias: STIKKI PEACHES

The man behind the alias:
STIKKI PEACHES You don’t have to be the most knowledgeable art lover out there to be able to appreciate Stikki Peaches’ work, you just simply have to learn how to look around you as you walk through your city, ready to catch a glimpse of one of his murals and let it sink into you.

Mostly anonymous, the artist hiding behind the alias has never let anyone snap a photo of his face, and is known to be absent at his own expositions.

“To do the type of art I am doing, you need to be able to go as you want and to travel without the risk of someone recognizing you. Most of the things I do are not always legal. It also allows people to put all their focus on the art itself instead of the artist behind it,” he declares.

Meeting him at his atelier somewhere in Montreal, which itself is pretty secret, I expect anyone to show up at the door ready to dig into the interview. I will not go into details in order to preserve his anonymity, but let’s just say the person who invites me into his atelier is one the most chill artists I’ve interviewed in my career. He even makes sure to answer my questions in a way that ensures I have enough new material.

“I am trying not to be to repetitive when I am doing interviews and to bring something new to the conversation, but you can’t really change your story. My background is in fashion, in the textile industry. It had a huge impact on my work obviously, but it was also my life and a passion for many, many years. My parents had a small and simple atelier at home, where I got to see their process. I was surrounded by patterns and sketches… textiles and stuff like that,” says Stikki.

You  would expect from anyone growing up in such a surrounding to follow the same kind of career path as his parents, but it wasn’t that an obvious of a choice for him.

“When I decided to pick a career, fashion wasn’t my first choice. I was actually going to major in psychology… and when I made that transition from college to university, I found it to be totally different. It kind of got me off guard. I was overwhelmed, and I didn’t feel the same freedom, I guess… So, I fell on my backup plan which was fashion. Not really a backup plan actually, but not necessary my first choice,” he explains.

Over many interviews, without giving too many details, he has talked about going through a dark and difficult phase before being the artist that he is today – an experience that made him grow with his artistic vision, but also as a human being.

“Without having to dig deep into the details, I reached a period of my life where a lot of changes were going on. At one point, I just had to stop doing what I was doing. I had to re-evaluate things, re-evaluate life, and re-evaluate my (pauses)… my peace of mind, health, everything. I had to reset myself and at the same time, with that, I was staying late at night, doing [my art], creating them and putting them out on the street. I had a couple of very cool supportive friends which are still around today that thought it was a fucking cool trip. We’ve ventured off and did what we wanted,” he explains.

“For me, it was an absolute adrenaline rush every time. Excitement. Freedom. It was a bunch of different things and every time we were going out, we were going bigger and picking places with higher visibility. At that point I had made the decision of doing what made me happy and to take my mind away from certain things and ideas, to take my mind away from bad energy. I had to change that, and I had to battle with it for a couple of years. Because, at some point, I was making life for people around me difficult. I am a very easy, chill type of person, so it wasn’t me at all. I wasn’t myself and I was really aware of it. So, it kind of developed into this form of art therapy,” Stikki declares.

From doing something to stop him from losing his mind to actually find his true calling, the transition happened pretty much right away.

“It was almost instantaneous that I knew I had to keep doing this, not even thinking on a business perspective or on a gallery level or anything. Nothing of that. There was no projected plan. I was doing that, creating it, and putting it out there. For me, it was such a release, such… something I had to pursue. I would never had imagined almost ten years later, quite honestly, being where I am today,” he says.

“For Mural Festival, I think two years ago, I had magically found the keys to a lift that was being used by the artists. Overnight, there was a wall that normally doesn’t get touched because it is kind of dangerous. It is that wall on Saint-Laurent, near Station 16 Gallery. It is very old, so with a buddy of mine, we used that lift with couple of flash lights and we put [up] a forty-foot piece overnight, with big block letters and rollers paint saying ‘Fuck Hate.’ It appeared at the festival overnight. We finished at 6 am, we put back the lift, and we fucked off. The organizers, which I know very well and are a bunch of amazing guys, they called me and were like, ‘You son of a bitch!’(laughs).”

Now a famous artist around the world, Stikki Peaches still considers himself a street artist, even if some of his work is shown in art galleries. Asking him about this decision to make his art more accessible, his reply comes pretty quick.

“I want to spark a conversation. Whether you support the message or not, you end up talking about it. If you can make the world talk and [make the art] resonate with people in different ways, it is what it’s supposed to do. I had to deal with every type of criticism, positives or negatives, but I made people talk and question themselves. It is a way of making art for different people. Now that I work for a gallery… it kind of gives me that balance to be able to create within my world and reach new people that would not necessarily notice my work in the streets… It is the beauty about it, you know, to see two different types of emotions one from the people who connect to my art in the streets and the ones who discover it for the first time. As long as I move them in any way, I am happy.” 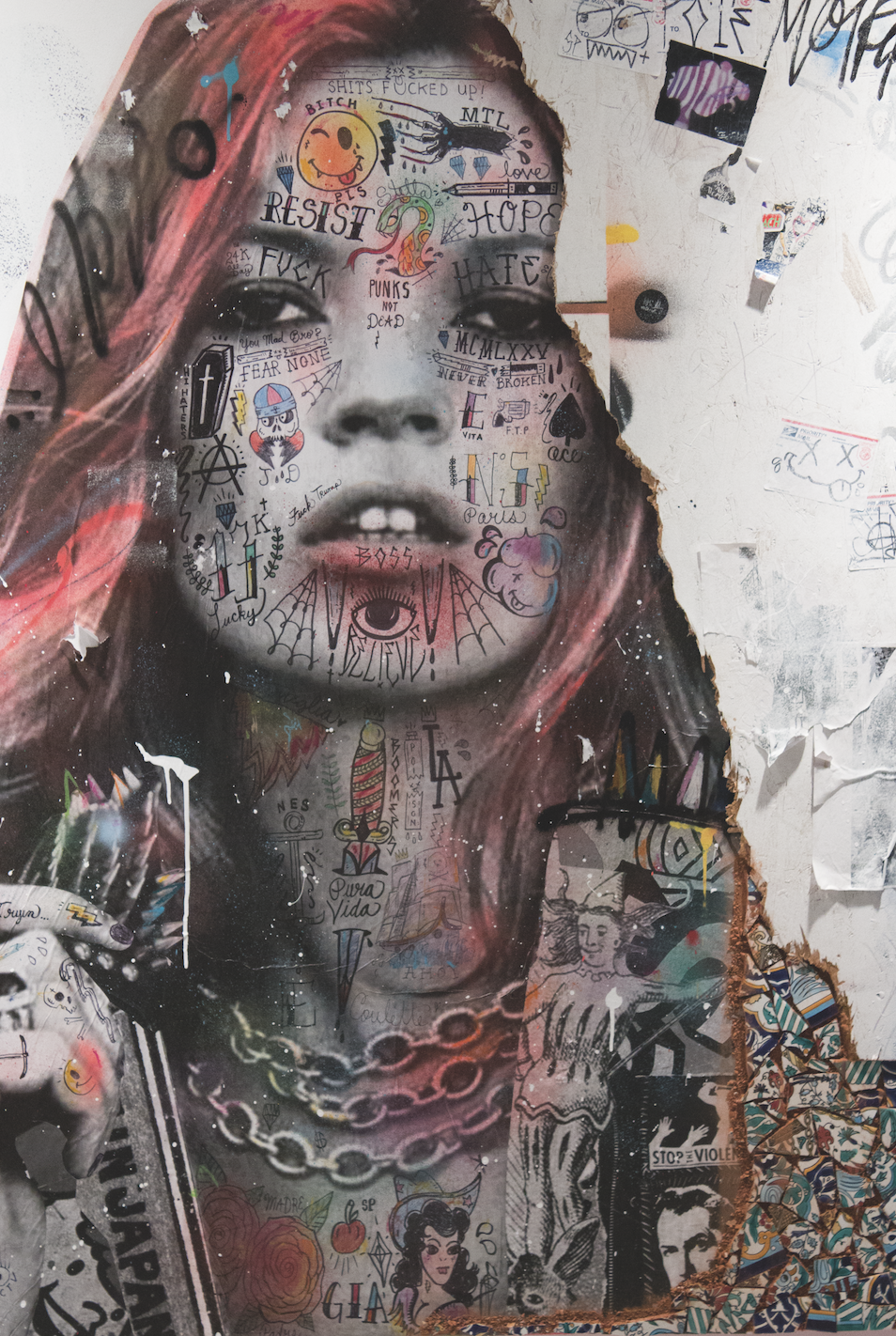